First, let me say that this post is long overdue, and for that, I apologize. No joke, you guys, I get an email or Facebook message about Cooper and his head tremors daily. Yesterday, I got two thoughtful, nervous messages and figured it was time to finally tackle this post.

Next, let me also say that I am not a vet. I’m not a vet tech. I have no medical training or expertise. All, every single one of the idiopathic head tremors FAQs below, along with the update about Cooper, are 100% my opinion. If you think your dog is facing this, bookmark this page to read later, and go to your vet. You HAVE to rule out underlying conditions (like seizures) before you can get an IHT diagnosis. Why? Because there’s no treatment, there’s no medicine, there’s nada for IHT, and some similar conditions are life-threatening and some can be treated. So, vet first. IHT FAQs later.

This post is not sponsored. There may, however, be links to brands I have worked with in the past, affiliate links, or links to products I use and love. OhMyDogBlog.com is a participant in the Amazon Services LLC Associates Program, an affiliate advertising program designed to provide a means for sites to earn advertising fees by advertising and linking to amazon.com. In other words: If you purchase something from an affiliate link below, you won’t pay a penny more, but this site earns a tiny commission that we use to offset the cost of running this site.

Now that that’s settled, here’s what’s going on with Cooper.

His diet has completely changed since I last updated. We gave up entirely on dog food and limited his treats to single-ingredient chews our friend Sof found and bits of veggies like carrots for training treats. We joke that when we sneak food to Cooper under the table, in his head he’s like, “Oh, boy! Peas! Spinach! Cabbage!” Whereas Emmett’s process is, “Bacon.”

We went through an entire round of elimination diet/ingredient testing and ended up home cooking for him. Until we discovered a store-bought food that works for him (more on that another day), but it’s limited to six human-grade ingredients. Plus I add some supplements.

I’m explaining all this (and I go into more detail below) because I truly believe that fixing his food and feeding him nothing but clean, single-ingredient, organic (when possible) food has been the game changer. He had one super long tremor in October, coincidentally the week before his annual exam, which I shared a few seconds of on IG:

Other than that, he’s been largely tremor-free, at least free from long ones (though sometimes we’ve noted he gets a small tremor super early in the morning, so he could still be having those without us waking up). I think that covers the updates. Now, FAQs! Stick with me… this is going to be a long one…

How did you diagnose idiopathic head tremors?

Here’s the thing: The word idiopathic actually means unknown. Here’s the Google definition, “relating to or denoting any disease or condition that arises spontaneously or for which the cause is unknown.” There is no known cause. A diagnosis only happens by ruling out all other possibilities. That’s why I can’t emphasize seeing your vet strongly enough. You MUST rule everything else out first. In our case, we were lucky. This is not a common condition at all. We thought it was a seizure the first time it happened, but after a battery of tests, numerous conditions including seizures were ruled out. Our vet knew she didn’t know, so she consulted with a veterinary neurologist at Ohio State University. She sent all his test results and the battery of video we had taken of the tremors, and he took a look at all of it and said IHT. He said we could do an MRI and run way more tests but that he knew they would all come back without results. Hence, IHT. But, we only got to that point after lots of tests, vet visits, and the consultation with the specialist.

What causes the head tremors in dogs? And how do you treat them?

This ties into the answer above. There’s no known cause. I have heard of people putting their dog on anti-seizure meds, but the OSU vet we consulted with said they don’t help, so we’ve never put Cooper on any meds for idiopathic head tremors. That said, the easiest way to “treat” the tremors in my book is to stop them. We do that with a treat and getting Cooper to focus. Typically we’ll ask for a simple behavior–shake, down, whatever–then have him chase the treat reward. Usually by the time he’s back, he’s stopped tremoring. Sometimes it takes a few repetitions, but it always snaps him out of it. I know that’s not “treating” the tremors, but it at least stops the incident. As for treating, I think my closest answer is in the food Q below.

Do you give Cooper medicine/supplements/flea and tick meds? {I’m lumping together tons of Qs here… like, do you give him a B complex or calcium supplement or fish oil, etc.?}

Short answer, yes. Cooper is on an allergy medication, Apoquel, and when his allergies are at their worst, we add in a Zyrtec. {Updated to add: We recently tried the Cytopoint injection. He’s only had one and it hasn’t been long enough for me to share more. When I know more, I’ll let you know!} He also gets a monthly flea/tick topical. He’s allergic to most “flavor” additives, so he can’t take a typical heart worm pill. He’s on Revolution, which takes care of heart worms and flea/tick. There has been a lot of discussion in the comments about flea/tick causing tremors. There’s no evidence to back that up, so I get nervous when readers post to “stop all topicals!” That’s a decision you need to make with your vet. For Cooper, his system is SO sensitive that we minimize the onslaught, but I do believe that the value of topical treatments outweighs the risk. Again, that’s just my opinion, and our vet is on board. You have to make that call. Do I think they contribute to his tremors? I can’t say for sure, of course, but I haven’t noticed a correlation like… apply topical, get tremors. It just hasn’t happened.

As for the supplement piece, here is exactly what we feed Cooper: He eats The Honest Kitchen’s minimalist fish formula, which I alternate with a fresh food from The Farmer’s Dog. I believe that has had the single biggest impact. Feeding him clean, healthy, wholesome food with no additives has helped him gain weight, cleared up his skin and ear infections, and more. If his system is struggling to process food, I think that can only help. To that we add two heaping spoonfuls of organic, unrefined coconut oil at night. For breakfast and dinner we also add in a vegetarian vitamin (he’s allergic to flavoring, and many vitamins have liver/beef/chicken flavor) called Udo’s Choice and a calcium supplement, KAL Bone Meal Powder.

He gets his allergy meds in the morning, along with a probiotic from Only Natural Pet. We’ve also started him on a joint supplement from Super Snouts {Updated to add: We discovered he’s allergic to mussels so switched him to a supplement from ONP that didn’t seem as effective as we’d like. We tried a Dasuquin, but he threw up. Back to the drawing board.} Changing his diet, testing, and determining what works and, more importantly, what doesn’t has impacted his health significantly for the better, so I can only assume that it’s had an effect on diminishing his tremors.

Do you think vaccines/medications/food trigger the tremors? Should I stop vaccinating my dog?

Per above, yes. I think it’s like in humans. Crappy food = crappy health. However, you have to decide if certain meds are more beneficial than harmful. For example, Cooper’s allergy meds. Sure, it’s a chemical concoction, but him not taking allergy meds? A red, itchy, goopy, miserable mess. The medicine, to

me, is worth it. As for vaccines, I get this question all the time, and I can’t lie… I am a believer in vaccines for both people and dogs. Again, this is a matter of personal choice in conjunction with your vet, but I believe in vaccinating, and Cooper does get vaccinated. That said, we do three-years to prolong the time in between, and he’s allergic to the rabies vaccine so has to have a shot of a super strong antihistamine before he gets his vax. Whether or not you should stop vaccinating your dog in an effort to curb tremors has to be a decision you make with your vet.

Is he in pain? Does tremoring cause long-term effects?

There’s no way to know, but every vet and specialist we’ve talked to has told us no. He doesn’t seem to be in pain. When it first started happening, he did seem frightened. I wouldn’t say he’s used to it now, but he’s fully aware when he’s tremoring/shaking/head bobbing/whatever you want to call it. We can get him to respond to cues to distract him out of it, so I don’t think he could be in too much pain. I totally get it being scary for him, though. Long-term? I don’t know. He’s five now. He’s been tremoring since 2012, and I would say he’s in better health now than he’s ever been, largely because of the food/supplement stuff mentioned above.

Okay, still with me? WHEW! Thanks for sticking with this post, and I really do hope it’s been helpful. On all the posts I’ve done about IHT–the three linked to above and a couple in the early days when we were awaiting diagnosis–have almost 1,000 comments combined. I tried my best to lump together the questions that came up most often, but it’s likely I missed something.

Please don’t hesitate to leave a comment with any questions I might have overlooked or comments/feedback on what you’ve been doing with your dog! 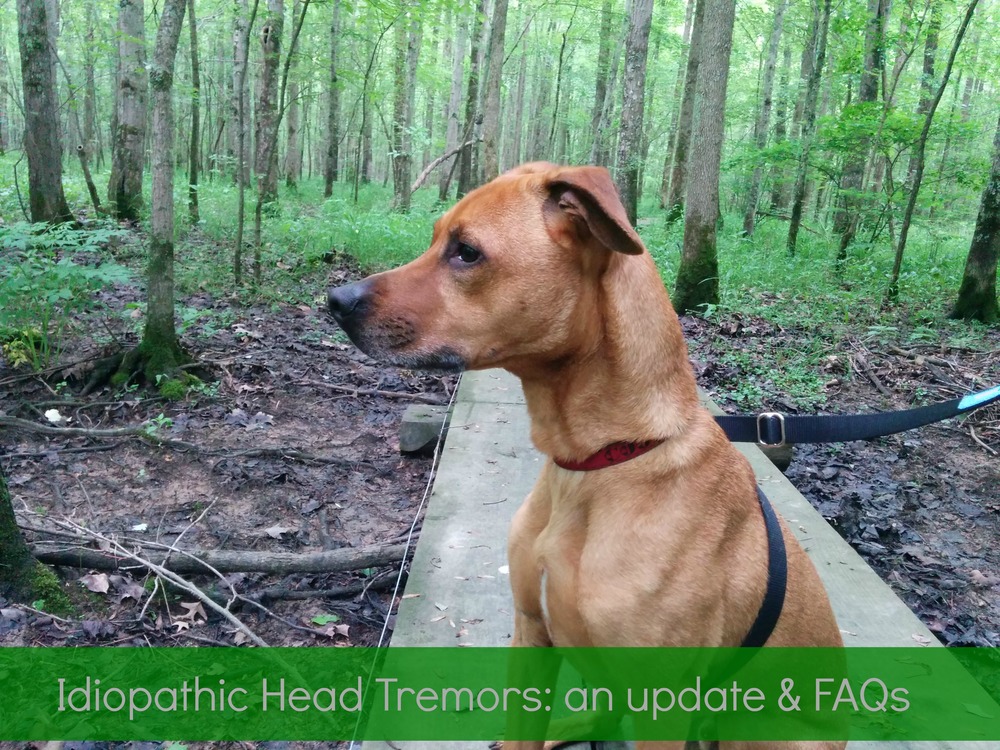